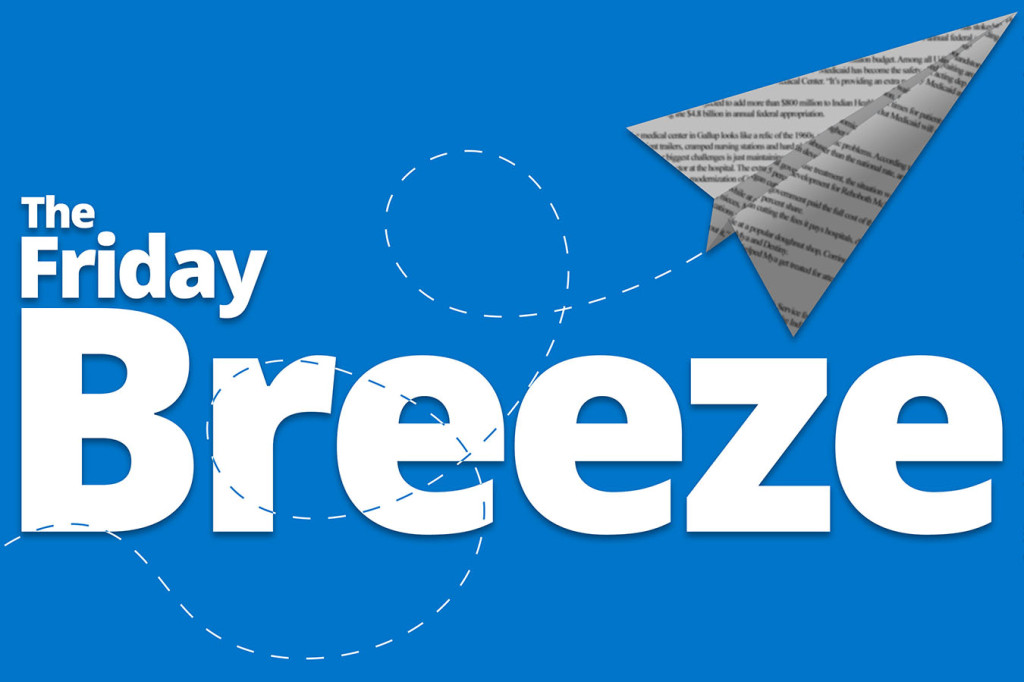 Want to read the best and most provocative stories from the week? Welcome to the Friday Breeze, where we compile them all — so you’re set with your weekend reading.

Your regular Breeze correspondent, and its creator, Brianna Labuskes, is taking a break, but we didn’t want you to be without some semblance of a report today of things you don’t want to miss in health care.

So I’ll do my best at filling in. Be kind, and check back next week for the really good stuff.

One of the biggest bits of news this week was a coughed-up blot clot from the lung. Not sure why that seemed to fascinate people. We can skip that, but feel free to look.

The Atlantic: Doctors Aren’t Sure How This Even Came Out of a Patient

A more authentic bit of news was the report that health care spending slowed in 2017. It’s still growing, mind you, but growing more slowly. That’s not terribly surprising, because it has been slowing for a number of years. What Dan Diamond over at Politico calls “slowth.” It increased 3.9 percent to $ 3.5 trillion, while the year before it had grown 4.8 percent. Another way to look at it: Americans spend $ 10,739 per person on health care. HuffPost had a nice analysis:

The New York Times attempts to explain why enrollment in Obamacare is down. Any number of things could factor in, like higher employment at places that offer health insurance, no mandate forcing people to enroll or people signing up for Medicaid. Further study may present an answer.

The New York Times: Why Is Obamacare Enrollment Down?

Want a roundup of the must-read stories this week chosen by KHN Newsletter Editor Brianna Labuskes? Sign up for The Friday Breeze today.

This week, the Annals of Internal Medicine retracted a 2009 paper by Brian Wasinick, the now-discredited Cornell University researcher. The half-baked paper had claimed that the recipes in the more modern editions of the classic “Joy of Cooking” cookbook had more calories than the original. The always enlightening Retraction Watch website, which tracks medical and scientific research that has been undermined, has the whole story of the delightful sleuthing that led to the debunking. (And while you are on the site, peruse all the other Wasinick papers on food research that have been rescinded.)

One of my favorite writers on health care makes an often overlooked point about health insurance: Its goal ought to be the same as other insurance, that is, to safeguard the financial health of beneficiaries. And Aaron Carroll, who is also a professor of pediatrics at Indiana University School of Medicine, says that several studies show it does exactly that.

Read the whole piece for yourself:

JAMA Forum: Medicaid as a Safeguard for Financial Health

As a bonus on this topic, here is an academic paper surfacing this week on the effects of the Affordable Care Act on mortgage delinquencies. Spoiler: The value of fewer evictions and foreclosures is substantial compared to the cost of the ACA subsidies.

The Commonwealth Fund, a foundation that seeks to improve health care,  wanted to know how the Affordable Care Act affected the uninsured and the insured. As its chart that summarizes its findings issued this week shows, there was considerable movement. The main finding was the number of young adults who switched from Medicaid to individual insurance — and the other direction as well.

The Commonwealth Fund: Who Entered and Exited the Individual Health Insurance Market Before and After the Affordable Care Act?

Commonwealth also conducted a forum on “Being Seriously Ill in America,” which dealt with the financial consequences.

Forbes likes to compile those “30 under 30” lists. (I’ve long wished someone would go back and look at one of those lists from 20 or 25 years ago to see how the luminaries are doing now.) Anyway, it put together a list of people in the health care industry. Most are on the cusp of 30, which might tell you something about how hard it is to get a fast start in the industry. But one person on the honor roll is only 18. In case you were wondering, because I was, Elizabeth Holmes, the founder of the ill-fated Theranos, was on a different “40 under 40” Forbes list in 2014. We hope these folks fare better.

This article ran a while back, but I got a kick out of it and just had to mention it. It looked at prehistoric health care. Researchers will never know how much Stone Age dwellers bored their hut mates with discussions of a paleo diet, but they are learning how they performed medical procedures that appeared to have worked.

The Atlantic: Neanderthals Suffered a Lot of Traumatic Injuries. So How Did They Live So Long?

May you survive another whirlwind week of health care news, until next Friday’s breezy recap.