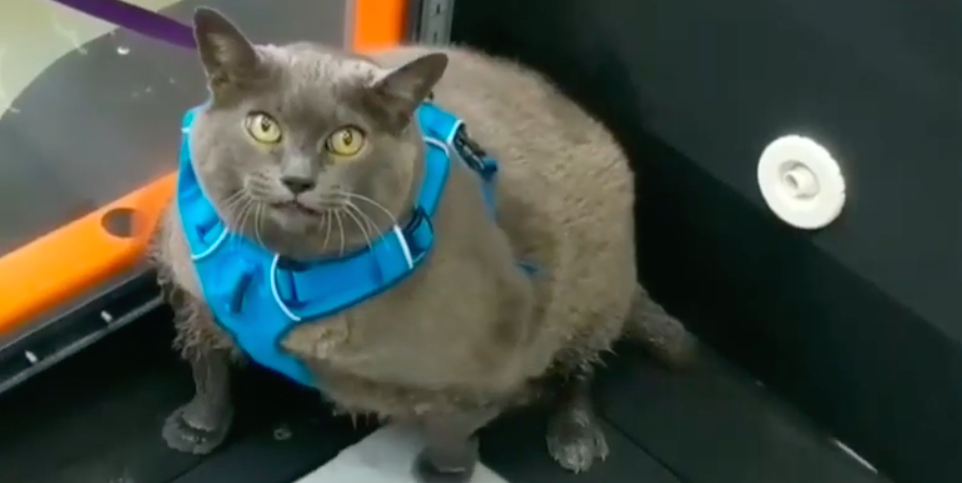 The internet has just found an unlikely hero in the form of Cinderblock, an overweight rescue cat whose half-assed attempt at walking on a treadmill is as funny as it is relatable. A video of Cinder exercising precisely one of her four paws while meowing in protest as a vet showered her with encouraging affirmation went viral this week, prompting widespread interest in her story.

Cinderblock was surrendered to the Northshore Veterinary Hospital last week, and vets have since put her on a program to help her lose weight — while chronicling Cinder’s journey on YouTube.

“This fabulous feline is obese, and it is affecting her quality of life,” they wrote in the caption for the first video. “Northshore Vet is helping her achieve weight loss through a prescription diet and exercise. It is important to feed a prescription weight loss food as nutritional deficiencies can occur if a maintenance diet is fed below maintenance requirements in order to reduce calories to achieve a negative energy balance.”

They go on to explain why it is necessary for Cinder to exercise on the underwater treadill, saying: “Cinder has arthritis in multiple joints and is carrying an extra 10 lb of body weight. The water provides a reduced weight-bearing environment that increases functional use of limbs without marked weight loading and resultant discomfort to joints. She’s still in the process of becoming acclimated to this treadmill and the water level is lower than we would like just so she can become used to the process.”

Pretty much the entire internet is behind Cinder and wishing her all the best, with many comments saying she has inspired them to get out of their own rut and improve themselves. The videos have also drawn the attention of pet food brand Purina, who have offered to support Cinder in her transformation.