Health care was the top issue for Americans voting in Tuesday’s midterm elections — for an understandable reason. Spending on medical care has skyrocketed in the past 20 years, hitting record levels in 2018 and weighing on both workers and employers.

Forty-one percent of those polled cited health care as their top issue, followed by immigration, at 23 percent. Roughly 70 percent of all voters, Democrat and Republican, said the U.S. health-care system needs “major changes,” while only 4 percent said it needed no changes at all.

Spending on medical care is the highest it has ever been.

The United States spends 18.2 percent of gross domestic product on health care, up slightly from 2017, according to Statista. That amount has jumped more than 260 percent since 1960, when the U.S. spent 5 percent of GDP on health costs. In the past decade alone, the percentage of costs to GDP has risen roughly 10 percent.

Americans spend twice as much as any other high-income country in the world on medical care.

Yet utilization rates in the United States were largely similar to those in other nations, according to a recent academic paper published by the Journal of the American Medical Association. High prices for doctors and nurses, pharmaceuticals and administrative costs were major reasons for the disconnect in overall cost between the United States and other high-income countries, according to the research.

The U.S. also has lower rates of coverage than other high-income countries. More than 90 percent of Americans have health care after the enactment of the Affordable Care Act, or ACA, but every other top 10 nation by comparison has at least 99 percent coverage for its population, according to the study. 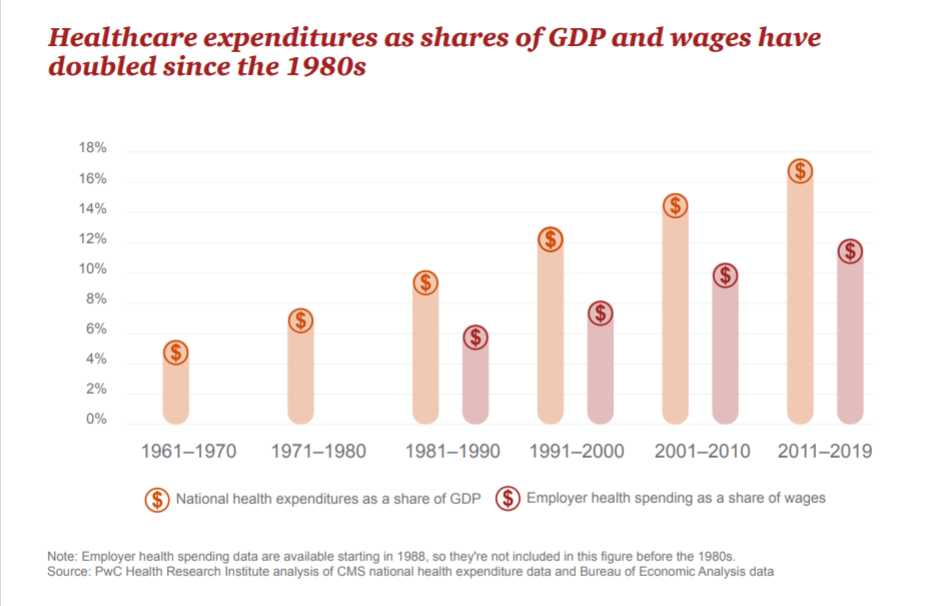 Companies are taking on a lot of that cost burden. Employer spending on health care as a percentage of wages has doubled since the 1980s, to about 12 percent from 6 percent, according to a PwC Health Research Institute analysis of CMS national health expenditure data and Bureau of Economic Analysis data.

Annual premiums for employer-sponsored family health coverage rose 5 percent this year, to $ 19,616, outpacing the 2.8 percent increase in wages, according to Kaiser Family Foundation. 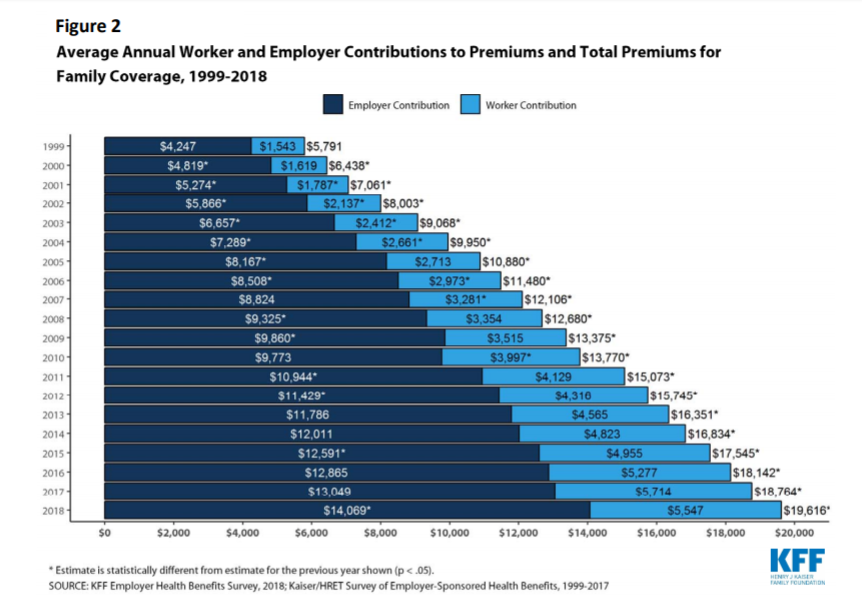 Health care was a key issue for Democrats ahead of the midterms, and many ran on a promise of support for the ACA and laws that protect pre-existing conditions. Republicans, meanwhile, focused their campaign messaging on the economy and immigration.

Health care has taken top priority a decade after the financial crisis cost many people their jobs and homes. For at least a decade, voters have cited the economy as their No. 1 issue. But now that the economy has recovered and unemployment is at lows not seen in decades, Americans are turning their focus elsewhere. Health care has been a political flashpoint for years, and especially since the ACA was passed in 2010. Republicans under the Trump administration tried a couple of times to tear it down, only succeeding in chipping away at it.

One of the biggest issues has been protecting coverage for pre-existing conditions, something the GOP has tried to eliminate or rollback. Some 58 percent of Americans polled said Democrats would better address the issue, versus 34 percent who said Republicans.