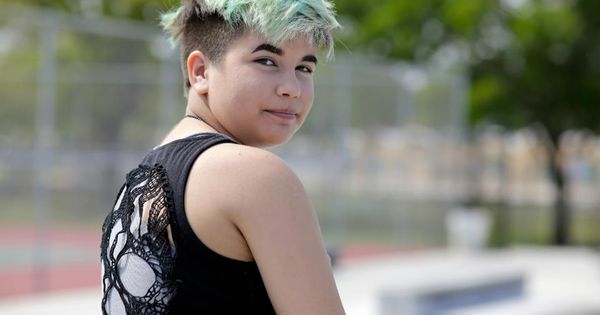 In advance of the annual meeting of the American Academy of Pediatrics (AAP), a poorly organized group of “parent activists” repeatedly spammed more than 45 journalists to spread misinformation about the AAP’s policy on caring for children and adolescents who do not necessarily feel comfortable identifying as the male or female gender they were assigned at birth.

These children might identify as transgender, might identify as a gender that is non-binary (that is, neither completely “male” or “female”) or might simply need time to figure out how they feel about who they are. The AAP released a policy statement last month with guidance for pediatricians on caring for these children. It’s that policy statement and the planned discussions about transgender youth care at the AAP meeting that these activists address.

Their primary concern is the incorrect belief that the AAP is forcing “powerful puberty blockers and hormones and bodily surgeries” onto their transgender and gender-diverse children. But that’s a far cry from what their policy statement, which promotes “gender affirmation care,” actually says. In fact, across its 10 pages, only a third of one page discusses pubertal suppression medication at all.

“The gender affirmation model is not necessarily based on treatment,” explained Jason Rafferty, MD, MPH, EdM, a pediatrician and child psychiatrist at the gender and sexuality clinic and at the adolescent health center at Hasbro Children’s Hospital in Rhode Island, and the lead author of the AAP statement. “The core is about creating a safe, nonjudgmental space to really receive these sorts of concerns and questions that kids and families may have so that you can begin to mobilize appropriate supports, whether it be behavioral health or family support or an alliance with your pediatrician to help explore some of these concerns.”

Sounds pretty radical, right? Giving children nonjudgmental support to ask questions without feeling frightened or shamed? That the statement the people spamming journalists have a problem with.

Why Write About This?

Typically, I avoid drawing attention to this kind of behavior because it’s not generally helpful to give oxygen to people sharing inaccurate statements and criticizing evidence-based policies. But I’m making exception for a few reasons:

1) The misinformation they share includes commonly held misconceptions by the public in general, so this is a good opportunity to educate others on what the AAP’s policy actually is and why the evidence-based policy is important for the physical, mental and emotional health of children and teens—including literally saving their lives.

2) Anyone who sends me more than a dozen identical copy-and-pasted messages from random email addresses that contain more than 1,400 words and an 8-page single-spaced letter attachment deserves to be called out not only for their false information but also their sheer stupidity in thinking this is an effective way to get me to take them seriously.

3) The lengthy statement says “it has been difficult to get much attention on the truth of gender identity due to the political nature of this topic” and includes this plea: “Do not let politics and fear keep you from the truth.” And so I won’t.

Who Sent the Emails

First, some background on the email and letter: the emails I received, sent (per the cc field) to just over 45 other journalists, came from individuals who signed their emails as “Over 1,000 Concerned Parents of late-onset transgender-identifying youth.” I have no easy way to confirm the number of parents because the letter (which claims over 1,100 parents), signed “Parents of Trans-identifying Youth,” does not include any names. The dozen emails I received came from a mixture of seemingly real people’s names and pseudonyms such as “Orwell_Lives,” “Nervous Wreck” and “PhD Scientist Mom.”

Not including names or an organization automatically dings a sender’s credibility; a major tenet of assessing the validity of information is knowing the source. I can easily find 1,000 parents who believe vaccines will harm their children—and those parents will gladly send me pages and pages of misinformation and supposed citations supporting their claims. That doesn’t make their information valid or worth covering.

Still, I did due diligence, reading their full email and letter. I looked at the specific quotes in the AAP policy statement they cited. I skimmed the citations they provided. They clearly misrepresent the policy statement and promote risky approaches, with inadequate evidence, to transgender and gender non-conforming care.

An example of how the letter-writing parents twist language is in their justification for remaining anonymous: “If you have any doubt as to why we are anonymous, you need to look no further than Rafferty et al.’s recommendation to consider legal ‘support’ in cases where parents do not comply with subjecting their children to experimental therapies.”

But here’s the policy statement text in context there, relating to family acceptance of youth: “In rare cases, a family may deny access to care that raises concerns about the youth’s welfare and safety; in those cases, additional legal or ethical support may be useful to consider. In such rare situations, pediatric providers may want to familiarize themselves with relevant local consent laws and maintain their primary responsibility for the welfare of the child.”

The care the statement refers to here is primarily emotional support and appears under the subhead “Family Acceptance,” which begins, “Research increasingly suggests that familial acceptance or rejection ultimately has little influence on the gender identity of youth; however, it may profoundly affect young people’s ability to openly discuss or disclose concerns about their identity. Suppressing such concerns can affect mental health.” The section goes on to discuss the high rates of suicide thoughts, attempts and completions among gender-diverse youth.

“It’s better to go to a place where there’s gender affirmation available versus somebody feeling so sad they just don’t want to live anymore,” Cora Breuner, MD, MPH, professor of pediatrics and adolescent medicine at University of Washington Seattle Children’s Hospital and chair of AAP’s committee on adolescent health, told me here at the AAP meeting.

One of the biggest concerns the parents express is that puberty blockers and cross-sex hormones are not FDA approved for gender transition in adolescents or children, they have risks, and their long-term effects are not well studied. All of that is true, and the AAP acknowledge all of those facts. But they’re secondary to the AAP policy’s focus, which is normalizing youth’s questions and feelings and meeting them where they are, Rafferty told me.

“We want to create a space where they can continue to explore [how they feel] until we figure out a treatment plan, whether or not include hormones or whatnot, based on their needs and as their identity solidifies,” Rafferty said. “So it can be very variable and very individualized, but the time is taken to figure out that plan.”

Currently, the AAP directs pediatricians to the Endocrine Society Guidelines regarding hormone treatment. The AAP makes zero recommendations about providing medication or other medical interventions to children or teens.

The parents claim most children raising questions about their gender will return to accepting the gender they were assigned at birth. The parents cite early studies plagued by methodological problems and limited follow-up. As the AAP writes, “More robust and current research suggests that, rather than focusing on who a child will become, valuing them for who they are, even at a young age, fosters secure attachment and resilience, not only for the child but also for the whole family.”

The parents’ letter also focuses on a non-scientifically supported concept of “rapid-onset gender dysphoria,” based on a single study by a single person that has multiple methodological flaws. The parents suggest that a child “suddenly claims to be transgender (often claiming to have discovered this through the internet or after being exposed to this via their friends or social media).” But that’s not how it works.

Generally, children and teens feel uncomfortable and come in with questions. It’s an ongoing process during which the AAP encourages pediatricians to support youth and help them feel comfortable asking questions and discussing their identity before any decisions are made.

“The assumption is that when someone goes to some place which provides gender affirming care, that we’re immediately going to go right straight into a pubertal suppression with hormone blockers or immediately give hormones to go to the other gender when, actually, that’s the last thing we do,” Breuner said.

The Heart of the Matter

This article would drag on for thousands of words if I addressed every false claim or concern of the letter writers. But their own words convey the transphobia that, despite their claims otherwise, underlie their fears and claims: “Trans-identification offers a way out of the misery of poor mental health, misogyny, loneliness and hatred of oneself. It offers a completely new identity (i.e., it’s identity suicide with the advantage of being reborn). Trans-identification provides body alteration, commands authority figures to alter their language and behavior, comes with a fight for social justice and provides a sense of belonging. Can you see this ultimate recipe for disaster? We see it playing out in our homes every day and it is torture that this is therapist- and pediatrician-sanctioned and encouraged.”

In short, the letter writers call it “torture” to support their children and those children question and try to understand how they feel about the body they live in.

The parents in the letter advocate for “watchful waiting,” which they falsely claim is supported by experts, instead of “gender affirmation.” Watchful waiting, in this context, is continuing to treat a child as the gender they were assigned at birth. The parents state it includes treating “underlying mental health issues” but does “not affirm that the youth is in the wrong body and instead only ask the youth to be open to all the possible reasons why they feel that way.”

Lack of support is often the cause of mental health difficulties, and watchful waiting is linked to worse mental health, including depression, anxiety and suicidal thoughts and attempts.

Gender affirmation is acknowledging the need to be open to figuring out what one’s gender identity is, supporting a youth as they ask questions and explore who they are, and is linked to improved mental health outcomes.

“The problem right now is that there’s still the sense that kids will grow out of this, that they’ll desist, that they’ll change their minds, and I think the better way of pointing this out is that kids will be what they’re supposed to be if we let them, and we shouldn’t push them one way or the other,” Breuner said.

That includes not denying them the ability to feel that their body might feel wrong to them—something the letter-writing parents explicitly reject.

“We shouldn’t push them to be the gender that they don’t feel they are, nor should we push them into something that they’re also not comfortable with at that time,” Breuner said. “What we’re trying to teach [parents and pediatricians] is to affirm gender and to affirm the basics of of health, which is love these kids. Love who they are, no matter who they want to be. You always need to be there for them.”