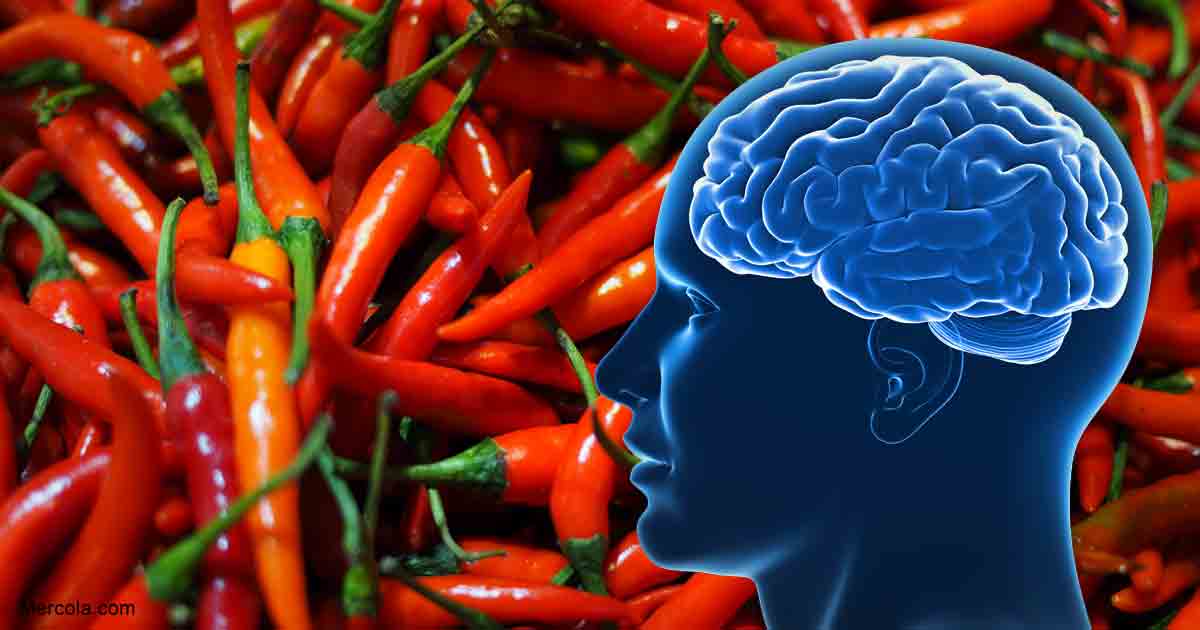 One of the most compelling statements in a 2014 study published in Frontiers in Aging Neuroscience is that in regard to Parkinson’s disease, “[A] growing body of evidence suggests that nutrition may play an important role.”

Parkinson’s disease is a progressive neurodegenerative disease that usually develops in older people, with such symptoms as inflammation, stiff muscles and tremors, all signs of decreased mitochondrial function. The disease is called idiopathic, which refers to conditions that occur spontaneously and with no known cause. It currently has no cure,1 one reason why prevention is key.

In Parkinson’s disease, movements like walking or turning corners slowly become more like shuffling, an indicator known as bradykinesia that occurs when brain signaling to specific body parts slows down, even suppressing facial expression. A host of other symptoms emerge gradually over time, including loss of smell, difficulty swallowing or chewing and memory problems.2

The study3 describes aspects of Parkinson’s as suppression of the autosomal-lysomal autophagy system, which is systematic degradation of your body’s functional components due to cell destruction, characterized by the loss of dopamine-transmitting neurons in the substantia nigra pars compacta (a section of the midbrain).4

The Michael J. Fox Foundation5 describes Parkinson’s as a chronic, degenerative neurological disorder that impacts 1 percent of the population. These individuals usually average 60 years of age, but some have been diagnosed at 40 and even younger.

“Recent epidemiological studies have revealed the promise of some nutrients in reducing the risk of PD [Parkinson’s disease]. In contrast, other nutrients may be involved with the etiology of neurodegeneration or exacerbate disease progression.”6

What Do Nicotine and Peppers Have to Do With Parkinson’s?

Another study at the University of Washington’s department of environmental and occupational health sciences in Seattle reported interesting findings regarding the association between Parkinson’s disease and peppers: Eating Solanaceae, aka nightshade vegetables, especially peppers, had protective potential, especially if study subjects had never smoked, or smoked less than 10 years. Here’s why that’s significant:

“Nicotine is the addictive phytochemical in tobacco, which is derived from plants in the Nicotiana species of the Solanaceae family. Other species in this family include Capsicum and Solanum, whose edible fruits and tubers include peppers, tomatoes, potatoes and eggplants. All contain nicotine.”7

So nicotine is a compound found in the plant family that contains tomatoes, potatoes, eggplants and peppers. It’s important to note that the amount of nicotine in these foods is negligible compared to that in cigarettes, the study stresses; probably even less than the amount in secondhand tobacco smoke.8

Dr. Michael Greger writes in Nutrition Facts that the amount of nicotine you get in your diet is hundreds of times less than what you’d ingest from smoking a single cigarette. But it depends on the nightshade vegetable and how ripe they are.9 Greger says what can be ingested via dietary nicotine just from eating some healthy vegetables may be significant, and explains:

“[The researchers] … found none in eggplant, only a little in potatoes, some in tomatoes, but the most in bell peppers. When that was taken into account, a much stronger picture emerged. The researchers found that more peppers meant more protection.

And, as we might expect, the effects of eating nicotine-containing foods were mainly evident in nonsmokers, as the nicotine from smoke would presumably blot out any dietary effect.”10

To thoroughly analyze what factors led to the neuroprotectivity of peppers, the researchers used around 500 newly diagnosed Parkinson’s patients along with another 650 individuals who didn’t have the disorder, in the Seattle area.

The scientists factored in the amounts of (or absence of) tobacco use (including pipes, cigars and chewing tobacco), a wide array of other foods (such as broccoli, sweet potatoes, cucumbers, peas, squash and onions), cooking methods and the amount consumed, as well as race/ethnicity, other diseases, sex and age.

At the conclusion of the study, the researchers wrote that eating lots of vegetables in the Solanaceae family was inversely related to Parkinson’s risk. No other foods had a higher positive relation, and peppers won the gold star for having the highest association. They could only suggest that eating these veggies two to four times per week could provide protective effects.

Are There any Other Factors or Foods That May Help?

An alkyloid known as anatabine, found in both nicotine and peppers, was identified in the featured study as another compound that may be neuroprotective because of its anti-inflammatory properties.11

Capsaisin, the active ingredient in hot chili peppers (which also puts the burn on when you bite into them), not only has been shown to play a potential role against Parkinson’s symptoms,12 but also has been shown to inhibit the growth of breast cancer cells.13 Capsinoids in peppers and capsaicinoids, the study notes, also activate, by a circuitous path, receptors in the substantia nigra and may affect the survival of brain neurons.14

Coffee lovers will also love the fact that caffeine consumption also has an association with a lower Parkinson’s risk, according to a trial published in Neurology. At least four cups per day (per measurement) was what scientists in the 2018 study recommended as the amount to help alleviate symptoms. Further:

“Decaffeinated coffee afforded no protection, pointing to caffeine rather than other substances in coffee or tea as the underlying pharmacologic agent … Thus, exploring the mechanisms by which caffeine may protect against PD is a worthwhile endeavor.”15

There’s also conjecture that your microbiome is a hotbed issue in the debate regarding Parkinson’s disease causes and potential ways to address it through improved gut health. Dr. George Tetz and his colleagues examined16 the bacteriophages (viruses that live in your gut) in Parkinson’s disease, as well as the role the microbiome may play in its pathogenesis, or the way it develops. According to Parkinson.org:

“This has sparked the idea that we might be able to improve the symptoms if we change the microbiome through diet or other ways … People with Parkinson’s have less of a specific type of bacteria that produces lactic acid.

These bacteria play a role in the processes that produce dopamine and affect the intestine’s ability to absorb. According to the study, people with PD did not have less bacteriophages than people without PD, but people with Parkinson’s were found to have an increased number of a specific kind of bacteriophage called the lytic-phase bacteriophage.”17

Tetz and his associates hypothesize that dairy may impact bacteriophages, specifically Lactococcus, a type of bacteria in lactic acid. Additionally, another recent study18 reported that dairy consumption is linked to developing Parkinson’s later in life.

But interestingly, the featured study draws on the findings of a study from 199619 that asserts drinking milk is associated with increasing your Parkinson’s risk, especially in men. Further, dopaminergic neurotoxins, including pesticides and polychlorinated biphenyls (PCBs) in dairy products, may also increase the risk, according to a 2002 study at Harvard School of Public Health.20 In addition, the featured study cited several other studies in reporting:

“Numerous studies have reported a decrease in peroxidase, glutathion-peroxidase activities and glutathione in the SN [substantia nigra] (indicating the loss of dopaminergic neurons in the substantia nigra pars compacta) of PD patients post-mortem; suggesting metabolic failure in antioxidant mechanisms and chemical processes can lead to lipid peroxidation and parkinsonian characteristics.”21

Another study showed that omega-3 polyunsaturated fatty acids (PUFAs) seem to be protective against several neurodegenerative diseases,22 and in another trial, researchers found patients’ motor skills improved with supplementation of riboflavin for six months — and eliminating red meat from their diets.23

What Changes Can Be Made to Offset Your Parkinson’s Risk?

Kelly Changizi, codirector of the Center for Neuromodulation at Mount Sinai Parkinson and Movement Disorders Center in New York City, said she often has patients ask if what they eat has any role in their disease, and acknowledges both that “It’s very interesting that nicotine in vegetables such as peppers may be neuroprotective,” and the study “provides further evidence of how diet can influence our susceptibility to neurological disease, specifically Parkinson’s disease.”24

She wasn’t the only medical professional to find the study about peppers being a link to alleviate symptoms and lower the risk of developing Parkinson’s an “intriguing” concept (although some still deny a “cause-and-effect relationship”). With any luck, the study may open the door to initiate changes in what had once been an assumption that nothing on the patient’s part could change their diagnosis.

It’s clear that diet has much more to do in the prevention of disease than many, including members of both the medical community and the general public, realized. Whether it’s eating vegetables for the nutrients they provide or working toward improving your gut biome, Greger’s conclusion is pithy and on point:

“Researchers conclude that their findings will need to be reproduced to help establish cause and effect before considering dietary interventions to prevent Parkinson’s disease, but when the dietary intervention is to eat more delicious, healthy dishes like stuffed peppers with tomato sauce, I don’t see the reason we have to wait.”25