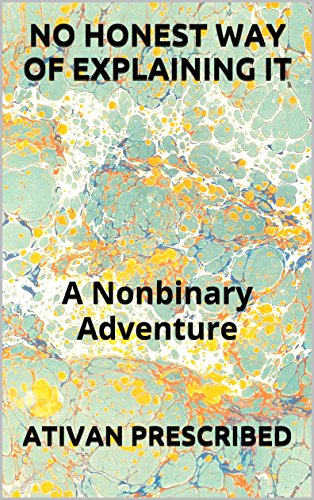 ‘No Honest Way Of Explaining It’
The title relates to Hunter S. Thompson’s explanation of ‘The Edge’. (The only people who know where it is have gone over it.) This fictional story is an account of Ativan Prescribed’s self-described adventure as a Non-Binary Person trying to man-up during the early 70’s ‘War on Drugs’. It takes place in Central America.
The emphasis is on Non-Binary Gender.
There is a romance with a Transgender Person in Nicaragua.
It includes a backstory of growing up Non-Binary, what it was like.
As it unfolds, there is a certain amount of loss of sanity due to the violent nature of the job as the main character evolves into a sniper giving cover fire to those stopping shipments of cocaine in Nicaragua.
The last chapter sums up the point of the entire story, the why it was written, from Ativan’s perspective.
It’s mainly a narrative point of view, from the first fateful day that they shot someone until they witness unspeakable brutality and end up being wounded and wondering what is going on in a hospital.
The last chapter, as well as the forward, stays in character, as if Ativan Prescribed is the author.
It is based on some actual events, but the characters are fictional and bear no resemblances to any living or dead persons.
It is told as she, he and I.
These points of view happen simultaneously for Ativan Prescribed as a Non-binary Gender. This is explained early on and continuously as the story unfolds.