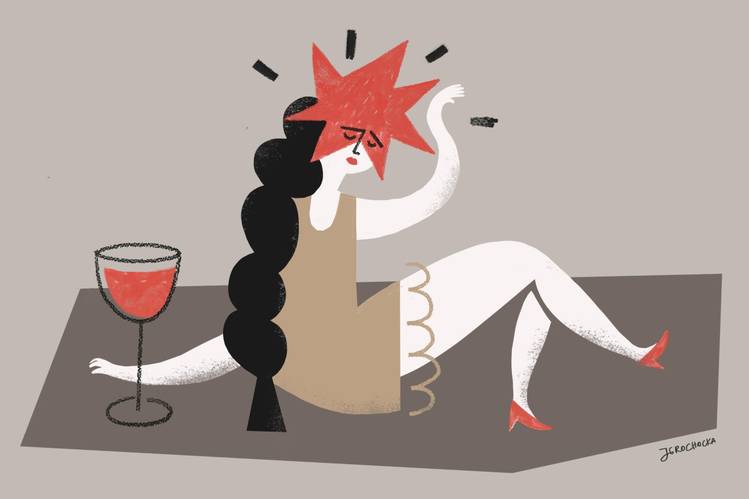 I KNOW PLENTY of people who suffer from headaches that they believe are triggered by drinking red wine—including, occasionally, me. Red Wine Headache is such a common complaint that it has both an acronym (RWH) and its very own Wikipedia page, albeit with a disclaimer noting a lack of medical evidence regarding the condition and its causes. As Dr. Alexander Mauskop, director and founder of the New York Headache Center in Manhattan, said, “We don’t know anything for sure.”

Wine-related headaches are one of the center’s most common complaints, especially among migraine sufferers, said Dr. Mauskop. He has heard many theories as to the cause. One posits that the type of oak used in the fermentation and aging of wine triggers headaches, though Dr. Mauskop couldn’t recall if French oak or American oak was said to be worse. He’s also heard theories about the sulfites in red wine as contributing factors, but he sees very few headache patients who are truly sulfite-allergic. That condition is actually quite rare, and besides, red wines have a lower concentration of sulfites overall than white wines do.

Dehydration can cause headaches, and alcohol acts as a diuretic—which means, of course, that dehydration can result from drinking both red and white wines, as well as other alcoholic beverages. A red wine headache might also signal an insufficiency of magnesium. “Alcohol is a major depleter of magnesium,” said Dr. Mauskop. He recommends that headache sufferers take 400 milligrams of magnesium per day.

Oddly enough, though there is much discussion of red wine headaches, just as the Wikipedia page warned, I found very little medical research on the topic. After consulting with experts, the only study I unearthed was published three decades ago in the Lancet, the influential British medical journal.

In the 1988 study, “Red Wine as a Cause of Migraine,” six researchers served 19 members of a patient group at the Princess Margaret Migraine Clinic in London either vodka or red wine to assess whether their headaches were red wine-specific or caused strictly by alcohol. The drinks were served in dark vessels and other efforts were made to disguise their flavor as well as their color.

The results were inconclusive: Some participants who claimed to be red wine-sensitive developed headaches from red wine, some did not. Some who claimed no such sensitivity did develop headaches after drinking vodka. The researchers suggested various possible explanations. Was it simply a matter of drinking too much? The study acknowledged that tyramine, another naturally occurring compound in food and wine, has been found to trigger migraines. But in this case, the tyramine level in the wine administered to participants was noted as quite low: just 2 milligrams per liter, which means each patient consumed less than 1 milligram. The conclusion: More research was needed.

“ ‘The doctor has heard theories about sulfites in red wine, but he sees very few headache patients who are truly sulfite-allergic.’ ”

I was curious about the potential of tyramine to trigger headaches but had little luck finding any further information on the topic. Chris Gerling, an extension associate at Cornell University’s Viticulture and Enology program in Ithaca, N.Y., noted that tyramine levels in grapes are highly variable. “It’s really hard to make a blanket statement about colors or grape varieties. Regions of the world report different findings,” he said. Mr. Gerling did note that since red wines tend to undergo malolactic fermentation more often than white wines do and often spend time in barrels where bacteria can thrive, reds have the potential to develop higher levels of tyramine.

Red wines also have higher levels of histamines, a byproduct of fermentation, than white wines. Some have cited histamines as a possible cause for headaches, though Mr. Gerling cautioned, in what was becoming a familiar refrain, “Nothing can be stated with certainty.” Phenols, compounds that give red wines some of their color, flavor and body, have also been put forward as possible headache-causing culprits—as yet another unproven theory.

So I found myself pretty much right back where I began, with lots of theories and no real answer. It wasn’t possible to identify potentially problematic wines by the high tyramine or phenol levels of the grapes or the amount of time they spent in particular barrels or even their respective histamine levels. I could stock up on magnesium and take a tablet a day, and I could drink water along with wine. I could also follow the lead of some friends who identify as red wine-sensitive and take an antihistamine tablet when I indulge.

These strategies might or might not work, Dr. Mauskop said. If I already had enough magnesium in my system, taking more wouldn’t prevent a headache. I could take a blood test to determine my magnesium level and, depending on the results, visit his office for a magnesium shot. Some of his patients do so monthly and find it helpful. But Dr. Mauskop didn’t think the antihistamine would be of much help. “Histamine release by red wine is not the main reason for headaches, otherwise antihistamines would help most people—and they don’t,” he said.

I’m not going to stop drinking red wine, even if it gives me a headache from time to time. And there is a chance that sometime in the future I might be better able to predict which wines will be more likely to make my head hurt. Dr. Morris Levin, chief of the headache medicine division and the director of the University of California San Francisco Headache Center, is working on a research project that he thinks might identify potentially problematic reds. “Wouldn’t it be great to be able to tell people which wines would be safe to drink?” he asked, rhetorically.

Read More:  Type 2 diabetes warning: This popular activity could cause a rise in blood sugar levels

Dr. Levin is about to begin the process of recruiting patients, and he hopes to include 50 participants or more in the research study. Shamelessly, I petitioned him to include me. “I’m putting you on the list,” he said. While I wait to hear more, it’s given me something to feel hopeful about in the new year.