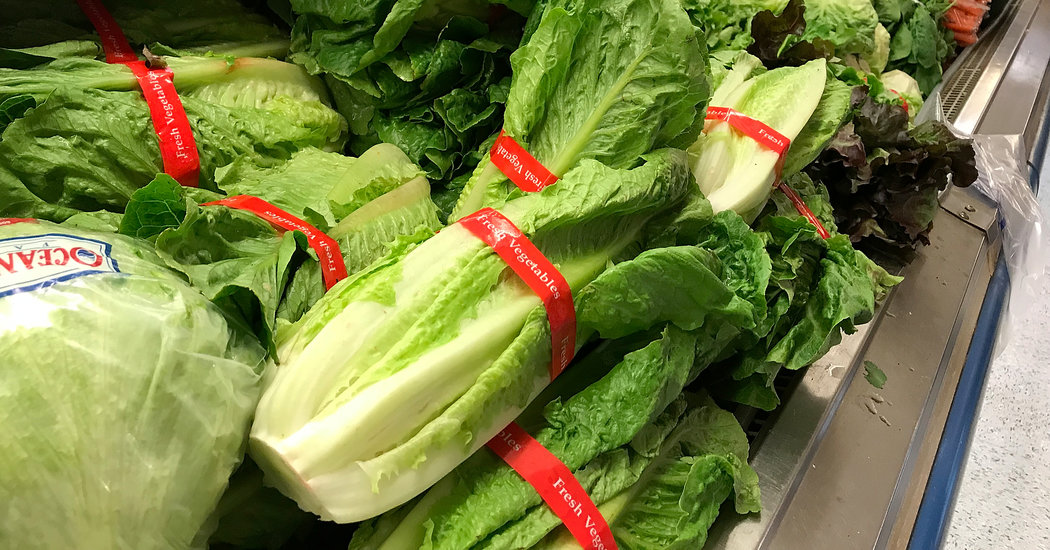 The warning came just as millions of Americans were preparing for the biggest food holiday of the year. People should not buy or eat romaine lettuce; restaurants should stop serving it; anyone who has it on hand should throw it out and clean the refrigerator immediately.

The stern and sweeping advisory, issued by the Centers for Disease Control and Prevention on Tuesday afternoon, two days before Thanksgiving, caught many people off guard. But the agency said it was acting out of an abundance of caution after 32 people in 11 states fell sick with a virulent form of E. coli, a bacteria blamed for a number of food-borne outbreaks in recent years.

“If you do not know if the lettuce is romaine or whether a salad mix contains romaine, do not eat it and throw it away,” the C.D.C. statement said. “Wash and sanitize drawers or shelves in refrigerators where romaine was stored.”

Officials said such measures were necessary while they track down the source of the contamination, and at the moment all they could say was that investigators believe the tainted lettuce was grown or processed in Canada or the United States.

They said a nationwide warning covering an entire type of food was unusual though not unprecedented, noting there was a similar alert regarding tainted spinach in 2006. Peter Cassell, a spokesman for the Food and Drug Administration, said officials were in this case mindful of the approach of the Thanksgiving holiday.

“It’s especially important given that these are large gatherings where dishes containing romaine lettuce are frequently served,” he said.

Read More:  Type 2 diabetes warning: This popular activity could cause a rise in blood sugar levels

The E. coli outbreak was first identified on Oct. 8 and has led to the hospitalization of 13 people, including one person who developed kidney failure. So far no deaths have been reported. Roughly a third of the cases were reported in California; the others are concentrated in the northeast and in the Great Lakes region. Another 18 people have been sickened in the Canadian provinces of Ontario and Quebec.

These cases are genetically unrelated to an E. coli outbreak linked to romaine earlier this year that killed five people and sickened 200, the officials said. Investigators later traced that bacteria to a tainted drainage canal near a lettuce farm in Arizona.

However the strain of E. coli associated with the current outbreak (identified as Shiga toxin-producing Escherichia coli O157:H7) has been involved in other deadly outbreaks, including one in 1993 that killed four children and left nearly 200 other people seriously ill from eating contaminated hamburger meat at Jack in the Box restaurants.

This strain is especially dangerous, health officials said, and the toxins it gives off can damage the kidneys. In the current outbreak, half of those infected have been hospitalized, a rate that is much higher than in other E. coli outbreaks, said Matthew Wise, the C.D.C.’s deputy branch chief for outbreak response.

Steve Feldberg was standing in his kitchen Tuesday in Montclair, N.J., preparing dinner and feeling stymied. He pored over the lettuce he bought over the weekend at the local farmer’s market. “I think it’s romaine,” he said hesitantly. “But it’s not classic romaine. So we’re taking a picture and emailing it to the hydroponic farm to find out, before we eat it.”

Health officials had some other worrying news for Thanksgiving week. The C.D.C. and the United States Department of Agriculture have been tracking a yearlong outbreak of Salmonella, which has been linked to a variety of raw turkey products, including ground turkey and some live turkeys (also some pet food).

A spokesman for the U.S.D.A. urged consumers to prepare turkey by following precautions such as careful hand washing to avoid cross contamination, and cooking poultry thoroughly.

Determining the exact cause of food-borne outbreaks has long stymied investigators, especially those that affect leafy greens. Contamination often originates with livestock that are raised or fed near produce farms. But it is not always clear how the pathogens travel to fields of vegetables. Scott Horsfall, chief executive officer at the California Leafy Greens Marketing Agreement, an industry group, said the E. coli outbreak of last spring prompted growers in Arizona and California to embrace ramped up cleaning of equipment and they agreed to triple the distance between cattle feed lots and lettuce farms. “E. coli and other pathogens don’t spontaneously appear in lettuce fields,” he said. “They have to come from someplace else.”

But some public health experts said the frequency of food-borne illness outbreaks points to the need for bolder action by both the industry and federal government, especially when it comes to tracing contaminated produce.

Sarah Sorscher, deputy director of regulatory affairs at the Center for Science in the Public Interest, a consumer group, said the industry has resisted more robust measures like the mandatory electronic tracing of produce after it leaves the field.

Read More:  An Update on Virtual Rounds at the Center for Women’s Mental Health, MGH

“They have to find a solution to this problem because when you can’t track down the source of an outbreak, the whole industry suffers,” she said.

Such tracing technology exists, she added, noting that Walmart has adopted a system that allows it to instantly identify the provenance of any given fruit or vegetable. “Something has to be done,” she said, “because if these kinds of outbreaks keep happening, consumers are going to avoid eating what is otherwise a very healthy food.”